The work of mapping the travel route of Payne and Froehlich with GIS is a work of close reading. One feature of GIS, which is different from the digital humanity techniques we had before, is that GIS provides variant data. These data are not only from the the travel of Payne and Froehlich but also from other historical events and characteristics of the region, such as the plantations, the Native American paths and the slave density. As Bodenhamer says “We see space as the platform for multiplicity, a realm where all perspectives are particular and dependent upon experiences unique to an individual, a community, or a period of time.” (The Spatial Humanities Bodenhamer)These data shows different aspects of the same area, by which we can explore its history and the interconnection of different events. The data provided through GIS play important roles in exploring deeply the travel route of Payne and Froehlich. 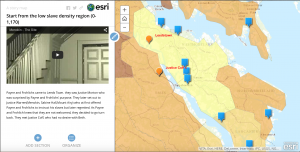 When we are mapping the travel route of Payne and Froehlich’s journey and comparing it with the data from other events in this area, we can easily figure out how Payne and Froehlich plan their route. The purpose of the travel of  the Moravians is to preach their religion to the slaves—to let them know God, and how God loves them. Therefore, I put the “slaves-1800” layer on the GIS map. GIS “manages large data sets” of slave density and “visualize the results of spatial analysis” (The Spatial Humanities Bodenhamer)by dividing places into regions with borders of different densities. It shows that the travel route follows a trend that starts from the place with low density of slaves to the place with high density of slaves. Also, the amount of colonial plantations follows the slave density—the higher the density of slaves, the more plantations in the place. There are several times that Payne mentions in the diary that they see the justice and see the slaves and the places they see the slaves are near or at the plantation. The GIS map also shows that part of their journey follows the Native American path. By GIS mapping, I also find out that the average distance they travel each day is 20 miles. When mapping their route, I find out more information than by simply read the diary. From the reading, we know the purpose of the journey, but we do not know how they choose their path, and why they choose one place instead of another. The article mentioned that they finally stopped at Justice Coff’s place and go back, which means if people were not against their plan at justice Warren’s place, they could have continued their journey. So, by exploring the plantation places in the map, I find out some potential “targets” for Payne and Froehlich—one route towards The Anchorage plantation or another route towards White House plantation in New Kent. When I am creating my storymap, I focus on how they choose their route and what could influence their journey. Just as I mentioned before, their preference follows the slave density and the plantations. Also, people, including the Justices, have important influence on their decisions. At first, for example, one Justice is against their plan which caused them to be more eager to complete their mission, and later Justice Warren stopped them from continuing their journey.

“Its unparalleled ability to manage and visualize data within a spatial context has led to a rediscovery of the power of map.”(The Spatial Humanities Bodenhamer). GIS map puts informations from different resources in a map, helping us to explore different events and characteristics at the same time. By doing this, we can find out the connection between these events and have deep understanding of the region.