The somewhat young medium of displaying history, the timeline, reinvented not only how people chronologically present history, but also the way in which they think about history. According to Grafton, “The timeline offered a new way of visualizing history, And it fundamentally changed the way that history was spoken of as well”  (20). The chronological, linear representation of events is a fairly new tool as it was popularized in the eighteenth century. However, its use is so widespread now that many do not think of other ways to represent history.

In an attempt to make even more sense of the Payne and Froehlich Travel Journals, we used several timelines to both give context and display the details of their journey. As a class, we used TimeMapper to create a timeline of events from the 1740s, when Payne and Froehlich were writing. Our goal was to provide context for the journal entries. Below is an image from this timeline, we aimed t 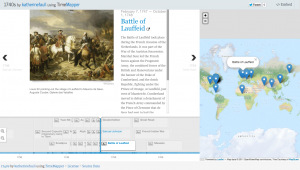 o focus our events to the US colonies at the time. This would allow us to reach a greater understanding of the journal entries by discerning their cultural context. The TimeMapper allows users to understand the story of the US colonies and the world during the 1740s. The chronology of events is important, as early events impact later ones. This timeline could have also been somewhat misleading, however, as there is a chance that we included events that were not relevant to the Moravians we were studying. If irrelevant occasions are included and emphasized as heavily as highly influential events, it is possible that we would gain false understandings about the material.

While TimeMapper allowed us to see the broader context for the journals, the TimeGlider timeline allowed us to show the chronology of Payne and Froehlich’s travels. We aimed to note the important events mentioned in their journals; showing where they went, who they met, where they stayed, and other details.  Being able to decipher what events helped to move their journey along and putting them on a timeline gave us the opportunity to view their story in a different way. As Grafton referenced W.J.T. Mitchell, “The fact is that spatial form is the perceptual basis of our notion of time, we literally cannot ‘tell time’ without the mediation of space” (13). This emphasizes the importance of spacial relations to telling time and ultimately understanding stories. TimeGlider allowed us to see the spacial re 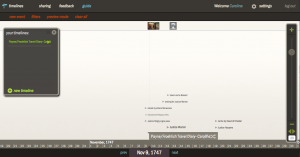 lations between specific events that occurred day-to-day for these men. To the right, is an example of my contribution to the timelines. From this TimeGlider timelines, we are able to see the interactions that the men had with different justices on different days. After combining all of the events onto one timeline, we will be able to see the travelers’ complete story.

In both TimeMapper and TimeGlider, the timeline creator is able to insert images, graphics, and texts that further elaborate on each point. This enables even more details to be provided for events. These digital additions to timelines allow users to gain deeper knowledge about the events.

Grafton points out that timelines as they are not entirely helpful as, “historical narrative is not linear” (20). He mentions the complex ways in which events interact and influence one another. This is an extremely valid point to make when speaking about the traditional timeline. However, the use of digital humanities and tools such as TimeMapper and TimeGlider, somewhat addresses this issue. As previously mentioned, these tools allow for more detail and therefore creates a more coherent and accurate narrative. The tools also allow the timelines to be concise and neat, while still containing copious amounts of information.

Creating timelines for both the travel journals themselves and the historical context of the journals helped to make sense of Payne and Froehlich’s journey. Their story can now more clearly be interpreted not only by its chronology, but also by the details of the events and the spacial representation of time.

As Grafton said “graphic representation is among our most important tools for organizing information.” (Grafton, p. 10), time maps and timelines are quite helpful for the study of history. These tools for organizing historical events match “our mental furniture” (Grafton, p. 10) which shows our favor on visual forms. Chronology organizes information in a pattern. It is always with time and events in order or images with time on it.

As technology developed, we now have computers with more advanced chronological tools. Timemapper, for example, turns time and location in the information into visual images. Instead of using chart, we put events on a straight line in time order, which can better show more specific time sequence and time distance between each other. We can also trace the event to the map, by which we can find the space distance between different events. By comparing events happened in different time and space, we can find out more things that have not mentioned in the texts—the hidden relationship of different events. By finding similarities of time and space and events, which can be easily seen on Timemapper, we can connect different events and tell a story—an event can be the cause of the next event or the effect of an earlier event.

“The timeline offered a new way of visualizing history” (Grafton , p. 20), Timeglider gives a good example for this. Timeglider compacts pages of 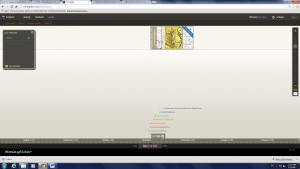 information into short titles in order which would be more clear and easier to understand. It is interesting that it organizes titles into “stairs” in order. In Payne’s Travel Journal, for example, we can figure out the route Payne and his partners traveled. We can also figure out the time they spend on different place simplely by seeing different distance between different titles. Titles that are close to the same vertical line show that Payne and his partners arrived in one place and quickly moved to another. Knowing this can help us find out the place where they spent more time staying in and that place would probably be an important place in which important events happened.

Without chronology, history is just a million different little stories thrown together. According to Grafton, “While history dealt in stories, chronology dealt in facts.” (Grafton, 10) Chronology adds order and reliability to history. The chronology of events has shown Christians, for example, “when to celebrate Easter” or when other important events may occur (Grafton, 11). It is also useful for combining and comparing more than one “line” of events. For example, we can compare the history of a certain place in the world to another place and see which events happened at the same time and create an even broader history of events.

Modern timelines can show more than just the chronology of events. We can represent history not only via the chronology, but also via the importance and the geography of the events. Grafton observes that “Teachers and theorists claimed, over and over again, that chronology and geography were the two eyes of history: sources of precise, unquestionable information, which introduced order to the apparent chaos of events.” (Grafton, 17)

Although each mode of representation offers a different “clarification” of the historical events, each one may also obscure parts of it. Sometimes it may look like two events occurred in the same location on the map in TimeMapper when in fact they occur in two different places just very close together. In Timeglider, events may be deemed unimportant when they should have been more important. These tools rely on the creator’s judgment and willingness to do deeper research before creating the timeline.

The point is, a line does not just represent the chronology of events. It is indeed a visualization of events over time. Therefore, it does not even just tell us a story; it shows us a story.

Chronology is the science of arranging events in their order of occurrence in time. It is really important to us because it determines the actual temporal sequence of past events. While historical texts have been subject to critical analysis, we ignored the formal and historical problems posed by graphic representations of time, the most important tools for organizing information for a long time. The “timelines” used to present the history is simple and intuitive while are not without a history themselves. At the same time, it shows us a story of history that held a status higher than the study of history itself. This week, we have experienced the Timemapper and the Timeglider to analyze the transcript of Payne Travel Journal. Let’s explore more with these two tools.

The web-based timeline software Timeglider is kind like Google maps, but it’s for a time. We can create and collaborate with other’s work together as interactive timelines. I can add the event from 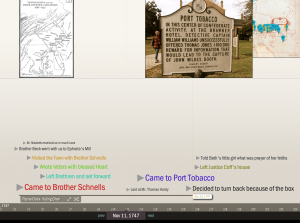 the journal with the time, dates and the images of the event. Also, I can edit each event in different words size with different color theme according to the importance of the event. By zooming in and out of the timeline, I will gain a broad view of the sequence of major events happened, which creates a brief outline of the story.

Chronology is also the study of the geologic time scale. Grafton observes that chronology and geography were the two eyes of history. In geography, the visual metaphor fits beautifully. By plotting geography, chronologies became precise and testable in a new sense and passion for exactitude to represent time in novel ways.Timemapper is one of the interactive timeline whose items connect to a geomap. Compare to Timeglider, Timemapper shows us the different events that happened in the same period with different location arou 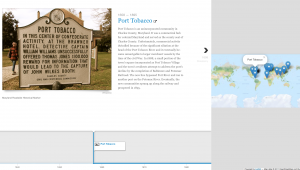 nd the world. When I looked over the Timemapper we created in the period of 1740s, it gave me a chance to think about the story and the relationship behind each event. However, the exact place of the events might be difficult to locate since the location’s name and boundary might change over time.

In his Introduction, Grafton observes that “Teachers and theorists claimed, over and over again, that chronology and geography were the two eyes of history: sources of precise, unquestionable information, which introduced order to the apparent chaos of events” (Grafton, p. 17)

In the process of compiling your entries for the collective 1740s Timemapper and the Travel Journal Timeglider how have you come to terms with the complex relationship between ideas and modes of representation?  How have the two modes of representation “clarified” historical events?  What might they also have obscured?  Does a line tell us a story?  Or just chronology?

Write a 300-word blog on this topic.  Include at least three points from Grafton’s Introduction in your entry and at least two illustrative screen shots from both the Timemapper and the Timeglider. Post under category “Contextual Research” and Blog #3.

In addition, choose one of your classmates’ posts and give them feedback in the Comment box. Your comment should be 50-75 words in length and respond to a specific argument that is made in the post. For example, your comment might identify a correlation between your own post and one you see in your classmate’s work; it might introduce to the post’s author a different reading of something they interpreted in the Grafton essay; or it might reflect upon ways in which you both consider Payne and Froehlich’s experience within a larger chronological landscape.